The Really , want to be one of the leading brands in the mobile market, both on smartphones as wearables, where after the launch of Really , Band, preparing to introduce Really , Watch.

This has not yet been seen much, but the brand’s CEO has already given clues that it is developing it. In addition, several certification listings have emerged in various regions, which clearly shows that it is being worked on for the near future.

Recently, a programmer known in the community presented new information and possible images of what may be the future Realme Watch, which, despite not providing any confirmation of what it will be like, is always an idea to take into account.

In the renderings we find a very familiar design, where we don’t even need to explain that it looks like a Watch from a brand that has an apple. Despite this, Realme gave its touch to differentiate. The screen will be square with rounded corners and thick frames around it. The “ realme ” mark will appear on the bottom of the device, and a single push button is located on the right edge. The bracelet does not appear to be “changeable”, at least from the images.

In addition to the design, some of its specifications have also arrived, where we can see that it will have a 1.4 inch TFT LCD touch screen with 320 × 320 resolution. The battery will have 160mAh which can guarantee a usage time of up to 7 days, with heart rate monitoring for 24 hours. It will have IP68 certification that guarantees water and dust resistance.

Its main functions will be step counting, heart rate monitoring, date and time functions, weather information, stopwatch and alarm and “Find my phone” function. Basically all that we can find in other devices of the kind.

Also the exercises you can follow are important, and here you will have support for at least 13 different types: 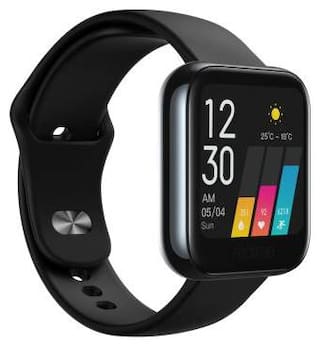 In terms of personalization, it is known that Realme Watch will have pre-defined displays, but it has not yet been confirmed whether it will be possible for other content creators to be able to have their own displays available to users.